The system of water regeneration from urine as part of the astronaut’s water supply complex allows to reduce the mass of water deliveries by cargo ships by 500 kg for 1 astronaut per year. With the average cost of delivering cargo to orbit about $ 40,000 per 1 kg, delivery of water to interplanetary travel is impossible simply. 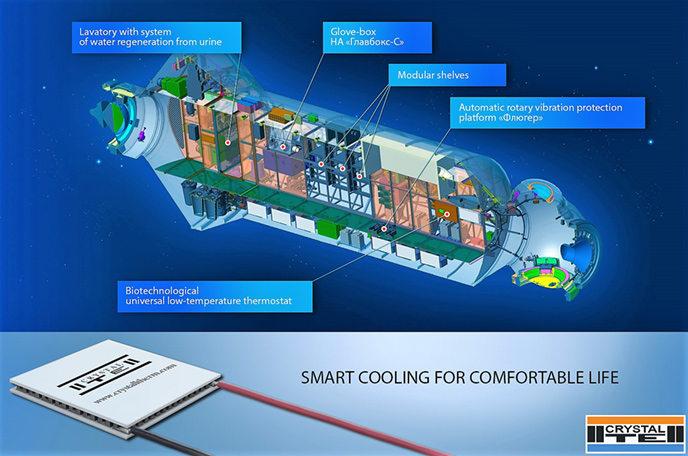 Due to the fact that modern systems for the recovery of water from urine are based on a relatively energy-intensive distillation process, one of the main design goals for the deep space travel is to reduce energy consumption for distillation. An innovative method is method is the recovery of thermal energy from condensation for carrying out the evaporation process using solid-state heat pumps - thermoelectric modules.

The SRV-UM system, developed for the MLM (SCIENCE) module of the International Space Station, implements a vacuum distillation process with a multistage sequential process of condensation - evaporation on rotating disks with primary heat input for evaporation due to the transfer of condensate heat to circulating urine in a thermoelectric heat pump. The distillation in centrifugal distillers is determined by: energy costs in heat pumps, coefficient and perfection of heat energy recovery, energy costs for the rotation of the distiller, energy costs for evacuation and heat losses. All other things being equal, the proportion of energy consumption for the rotation of the distiller is the lower, the higher the distillate capacity of the system. For example, despite the fact that the efficiency of heat recovery in distillation with a vapor compression heat pump is potentially higher than in multistage distillation with a thermoelectric heat pump, the specific energy consumption (Wh/l H2O) in the SRV-UM system is more than two times lower than in the UPA system.

UPA system, based on the process of vacuum distillation in a centrifugal distiller with a rotating cylindrical surface, on one side of which the process of evaporation of water from urine takes place, and on the other side of condensation of steam. The temperature difference for transferring the heat of condensation for evaporation is created by compressing steam in a steam compressor (PC) built into the distiller.

The use of thermoelectric modules manufactured by Crystal Ltd. in the SVR-UM system, as well as in the systems being developed for manned interplanetary aerospace stations, is evidence of their high performance and high reliability.