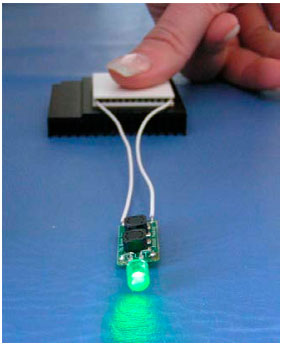 The electromotive force emerges in closed loop of two different conductors when junctions of conductors are maintained in different temperatures.


Thermoelectric generation bases on Seebeck’s effect, which consists in the fact that in electrical circuit consisting of different materials, connected in series, an electromotive force emerges when contacts are maintained at different temperatures.

Such circuit, composed of two different materials (semiconductors of n-and p-type conductivity), is called a thermocouple or a thermoelement. The device usually consists of tens or hundreds of thermoelements, connected in series.

Basing on demand for thermoelectric modules with hot junction temperature up to 150 °C, Crystal Ltd. manufactures a wide range of such modules.

Here are some of applications:

The list of power generating modules with technical characteristics can be found in this file. DOWNLOAD FILE.