Today we would like to share the following example of the use of thermoelectric modules manufactured by Crystal Ltd. in aerospace vehicles. On February 28, 2021, the modern russian satellite “Arctica-M” was launched into a highly elliptical orbit. 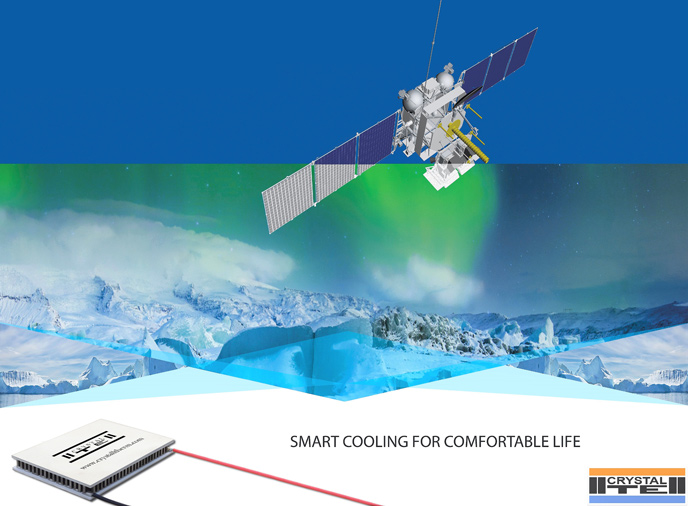 The orbital constellation of the system should consist of two identical spacecraft (SC) “Arctica-M”, manufactured by Lavochkin Science and Production Association, operating in highly elliptical orbits of the “Lightning” type, alternately replacing each other on the working sections of the orbits located in the apogee region, which will provide a continuous round-the-clock overview of the northern territory of Russia and the Arctic region of the Earth.

The SC “Arctica-M” is equipped with the main and backup MZSD (MULTI-ZONE SCANNING DEVICE) for obtaining multispectral images of clouds and the Earth’s surface in the visible and infrared ranges within the visible disk of the Earth in the entire range of observation conditions and issuing digital information to the onboard data collection system. It is in MZSD that high-performance and highly reliable thermoelectric modules, produced by Crystal Ltd, operate.

It is beyond our competence to present all the advantages of the “Arctica-M”. Our goal is to show an example of using the products of Crystal Ltd Company as part of innovative space equipment designed to provide information support for solving problems of operational meteorology, hydrology (studies natural waters), agrometeorology (studies the impact of weather on agriculture), climate and environmental monitoring in the Arctic region.

The thermoelectric module, developed by Crystal ltd. At the request of the customer for a specific device, is produced using serial technology and has strict quality control at each stage of production in accordance with internal regulations. However, at the final stage of acceptance tests, the customer carried out his own tests of the thermoelectric module as part of his own assembly. As a result, the following successful tests were carried out:

This volume of testing could not be completed in 2 days and the research took more than 1 year. This is the hard and long way of creating devices capable of operating in the harsh conditions of space for not least 7 years.