Crystal Ltd. Company continues to expand its line of thermoelectric devices based on Peltier modules of its own production. Our advantages are the uniqueness of our semiconductor material manufacturing technology and the high competence of the engineering team. The mentioned advantages give us the ability to be flexible and respond to requests quickly.

An important application for thermoelectric device is the thermal stabilization of the Diode-pumped solid-state lasers (DPSSLs). Today we want to present you two updates of Thermoelectric chiller CFC-250-TE-AIC. The main feature of the CFC-230-TE-AIC model is a doubling of the pressure of the cooled liquid. For this type of chiller, the liquid pressure at the outlet became at least 1.5 Bar. Thermoelectric chiller CFC-230-TE-AIC-HM increased pressure model additionally received the mode of heating the liquid coolant to a temperature of +45°C and the accuracy of maintaining the temperature of ±0.15°C. 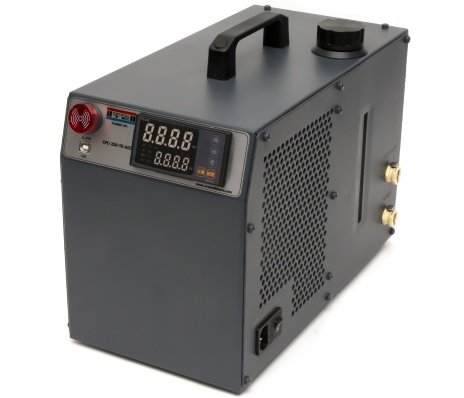